Will Nonprofit PPP Loans Replenish This Week? – Senate Democrats and Republicans have come close to a deal that could inject roughly $370 billion into loan programs for nonprofits and small businesses including $310 billion more into the Paycheck Protection Program (PPP), setting aside $60 billion for rural and minority groups. The remaining $60 billion would go to the Economic Injury Disaster Loan program (EIDL), a separate program offering loans for small businesses. Treasury Secretary Steven Mnuchin told Republicans on a call Sunday afternoon that outstanding issues relating to the bill are limited to increased federal funds for coronavirus testing.

The talks come after the $349 billion Paycheck Protection Program, which offers forgivable loans to small businesses, ran out of money on Thursday. Democrats rejected a proposal to refill the fund two weeks ago. They instead argued for changes, including adding more money to support federal testing, hospitals and local governments. They’ve also pushed to ensure groups without banking relationships get access to the program and SNAP benefits.

Mnuchin said on CNN’s “State of the Union” that leaders are “making a lot of progress” and he hopes the deal will be passed in the Senate on Monday, in the House on Tuesday and be up and running on Wednesday.

Rep. Steny Hoyer, D-MD, sent out a note Sunday evening saying “pending agreement” the House could take up the bill as soon as Wednesday.

Much to our surprise we received a notice from Discover Card that the Small Business Administration had made an inquiry at Experian as to our personal credit score number. We applied for a PPP Loan as an agent of a nonprofit organization on April 3, 2020. This is the message we received from Discover on Friday, April 17, 2020: 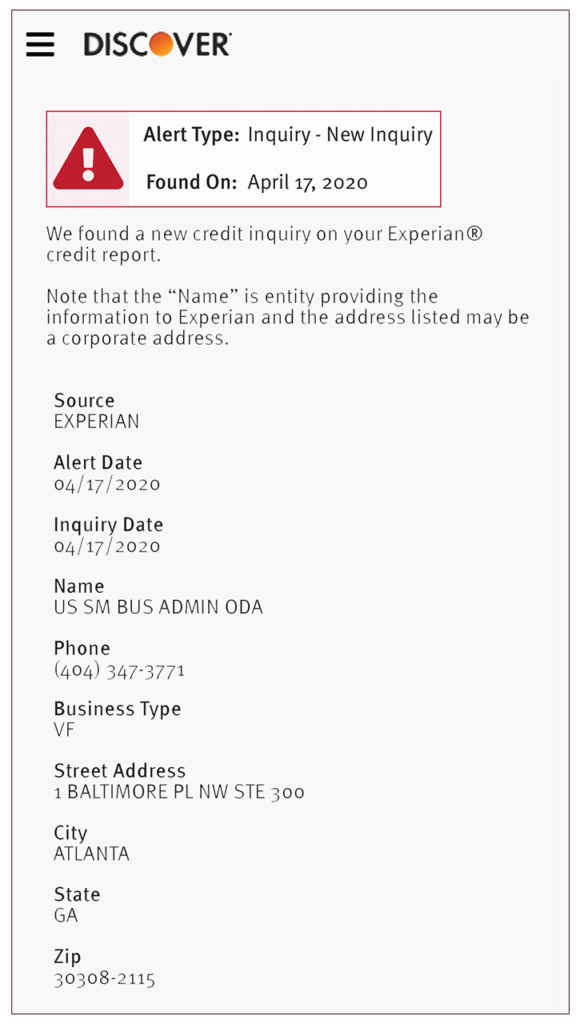 We would like to note that the SBA seems to have made a credit score inquiry not our actual lender. We also found it interesting that despite hearing that the original $350 billion had run out on Wednesday for PPP Loans the SBA was still handling our application on Friday evening.

On Thursday evening April 16 the U.S Treasury released a six-slide PowerPoint Deck named Paycheck Protection Program (PPP) Report sharing details about the the SBA’s performance during the period April 3-16. We discovered information in this document not commonly distributed by media outlets.

It took only 13 days for loan requests to top $340 billion. That’s impressive. The problem is, a lot of the money went to larger businesses because of, in part, quirks in the way the law was written. And when large businesses—that trade on stock exchanges and have access to traditional debt and equity capital markets—use the SBA PPP, it drains resources from more needy businesses. Over the last few days, there has been a growing backlash over the distribution of the funds. Several media outlets have revealed how large chunks of the package were taken up by chain restaurants, hoteliers and publicly traded corporations, rather than small, local businesses.

What’s more, 44% of the SBA loans went to 4% of loan requesters. That’s about 67,000 applications taking almost half of the resources. There are about six million small businesses with less than 500 employees in the U.S.

74% of PPP loans were for under $150,000, demonstrating the accessibility of this program to even the smallest of small businesses. That’s true, and it’s a good thing, but regulators need to pay attention to the loan size distribution too.

Wells Fargo May Be In Trouble Again

Inside Charity is pleased to report that hundreds of nonprofits have indicated that their loans have been approved. (Few have yet to see funds deposited into their accounts.) Over 400 comments and questions have been recorded at Inside Charity by nonprofit executives, staff, board members, ministry leaders and volunteers over the past ten days. We grateful to everyone who has participated and want to encourage as many as people as possible to continue to share their experiences. Your written comments and contributions have helped your colleagues navigate this process.

Will Nonprofit PPP Loans Replenish This Week? was first posted at INSIDE CHARITY

For more articles like Will Nonprofit PPP Loans Replenish This Week? VISIT HERE

Will Nonprofit PPP Loans Replenish This Week? was authored by Jimmy LaRose. LaRose’s work as an entrepreneur, author, fundraiser, speaker and co-founder of NANOE (National Association of Nonprofit Organizations & Executives) has raised hundreds of millions of dollars around the world for people in need. His best-selling book RE-IMAGINING PHILANTHROPY has been named by BookAuthority as one of the 100 Best Philanthropy Books of All Time.

Will Nonprofit PPP Loans Replenish This Week? and other INSIDE CHARITY content and comments are for informational purposes only, you should not construe any such information or other material as legal, tax, investment, financial, or other advice. All content on this site is information of a general nature and does not address the circumstances of any particular individual or entity. Nothing on this site constitutes professional and/or financial advice, nor does any information on the site constitute a comprehensive or complete statement of the matters discussed or the law relating thereto.